No-dig or no-till gardening is perfect for food crops. Learn why the no-dig gardening method is the preferred way to garden to save time and effort and get better results.

Tilling or double-digging. Most traditional farming techniques use some form of tilling the earth or in the case of home gardening, double-digging a patch of soil.

Both are backbreaking work. And both actually don’t do much good for the soil. And cause more work for you later.

What is the alternative? It’s called no-till or no-dig gardening and it’s becoming more popular for reasons I’ll outline below.

The problems with tilling or double-digging 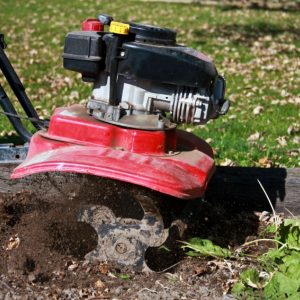 The moment you till the soil or double-dig you affect soil structure.

Soil is a complex living organism and in nature soil is built up from many years of natural decay of materials that fall on the soil such as leaves and dead branches and even trees.

There are actually layers in the soil and at the different layers different organisms live including beneficial fungi.

By tilling or double-digging you break up that structure and it needs to then repair itself.

The other issue with working the soil is that you bring up dormant weed seeds. The moment those seeds see daylight or are close enough to the surface of the soil to get more moisture and warmth from the sun, they will sprout.

And it really is hard work! Even tilling with a powered tiller is a difficult task as tillers are not that easy to control especially if you have a lot of rocky soil. And it’s noisy and smelly as most tillers are gas-powered.

What is the no-dig gardening method? 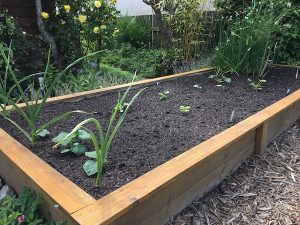 The basics of no-dig is that you don’t work the soil before the growing season.

Instead of that backbreaking work, every year you layer on a thick layer of a good quality compost. Usually 4-5 inches (10-12cm) is a decent layer, although even 2 inches (5cm) can be enough, especially if you’ve already established a healthy soil and are just maintaining it.

Where do you get that much compost?

Ideally it would be great if you could generate enough yourself over the course of the year to  supply your garden with that annual layer but that can be a huge undertaking, especially in an urban backyard.

Instead you can get a load of good quality compost delivered, like I did. More on that later.

You can also mix in aged manure or other sources of composted materials.

And then literally spread a thick layer on all of your established beds after doing a quick weeding.

While this might be what traditional organic gardeners do, they also then work the compost into the soil, either by tilling or forking.

No-dig doesn’t do any tilling or forking, letting nature take care of mixing the compost with the native soil over the course of the year. There are enough worms and other beneficial creatures in the soil that will do the job for you!

If you have a lot of weeds due to neglecting your beds or if you’re starting new beds on either grass or wild areas, you can knock down any tall growth, then put a double layer of brown corrugated cardboard (tape or staples removed) first then the layer of compost on top.

This is the simplest of what is called the lasagna method. You can also add other organic materials such as straw, aged manure, leaves and such, with the final topping (the cheese on top of the lasagna!) being your layer of compost which you plant into.

In the first year you can grow shallow rooted crops such as greens and lettuce, to allow the cardboard to break down and the soil underneath to loosen up before you grow root crops.

Can You Grow Carrots or Parsnips With No-dig?

Charles Dowding, who has popularized no-dig on his YouTube channel, has a market garden where he grows lettuce, greens and other veggies to sell to restaurants and stores.

He grows the most amazing carrots and parsnips without deep digging his soil as is commonly thought of as the only way to grow long root veggies. He also doesn’t amend his soil with sand or any other materials designed to loosen the soil. 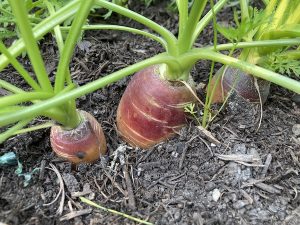 Now as I mentioned above you might not have much luck growing long carrots the first year or so of no-dig. There are stubby versions of carrots such as Nantes and Chantenay that do better in shallower soils.

But keep in mind that since your carrots start in  a rich mixture of compost they will be stronger at pushing through even your native soil.

The other alternative is to use raised beds for your carrots and use regular garden soil to fill them and then top off with a good layer of compost to start your no-till process.

My experiences with the no-dig gardening method

So in spring 2020 I decided to switch over to no-dig in my raised beds.

Before I was putting compost in my beds but usually just a thin later, maybe at most 1-2 inches (2.5-5cm). And I did usually fork or spade it in, mixing it up with native soil.

I ended up with a lot of weeds! Partially because I was digging up weed seeds that were on the surface of the soil before I put the compost in, but also because my compost bins generally don’t get hot enough to kill weed seeds (even though we’re trying not to put any weeds that have flowered). 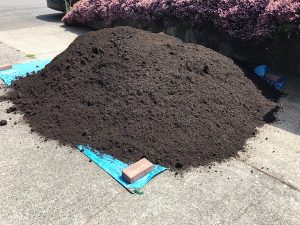 So in the midst of the pandemic, I ordered what is called “soil amender” or compost. It’s created from green waste at high heat to kill any pathogens, etc. and I believe they also add some forest wastes and such.

I decided because I was already having to pay for delivery, I might as well get 5 yards (4.5 cubic metres). Wow, that was quite a bit!

And it smelled great! But very steamy. The person I talked to on the phone mentioned that because of the demand for compost with many people being home and wanting to start a garden, they had to shortcut the compost creation process.

As a result the compost was still considered hot and she cautioned using it around seedlings. However I found that once spread out it cooled quite quickly.

I already had several plants in the raised beds that I had to work around. It’s obviously easier if you have empty beds, as then you don’t have to worry about working around established plants.

So I applied the compost. That took many wheelbarrow loads! It was good exercise though and kept my mind off of what was going on in the world.

The first thing I noticed is that my plants started growing faster. Squash I planted seemed to take off. And everything appeared greener and healthier.

I also created some planters and used the compost in them straight without any other soil. 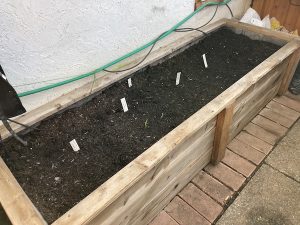 And I topped up the raised bed in my greenhouse.

And still had some left over so I used it as a mulch over my flower beds. Interestingly enough I used a thinner layer and later found that it didn’t suppress weeds that well. More on that in a bit.

I also noticed less issues with pests. I think because the plants were healthier, they attracted less pests that prefer plants that are under stress. 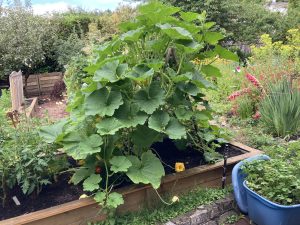 I had a bumper squash harvest as well as beans. Even though I ended up planting some things too late because I was sick most of March.

But the main thing (and this is what Charles also stresses) is the lack of weeds, which I’ve already mentioned a bit about.

I was usually in the raised beds every week or every other week, removing annual weeds. This time other than some bindweed and maybe some annual weeds that sprouted from seeds dropped by birds, I had almost no weeds. And still don’t, now that we’re heading into spring again.

That alone has saved me a ton of time!

Any beds where I put a thinner layer or didn’t put any had weeds. So that 4-5 inches is worth it, even though it may seem a lot at first.

I also did a video on no-dig on my YouTube channel:

So should you try the no-dig gardening method? I highly recommend it. Get yourself a good supply of compost, either your own or from a reliable supplier. You might have to experiment to find the right blend.

It will save you time, increase your harvests and build your soil so you can grow food for your family for many years to come.

How to Plant Winter Field Peas as a Cover Crop 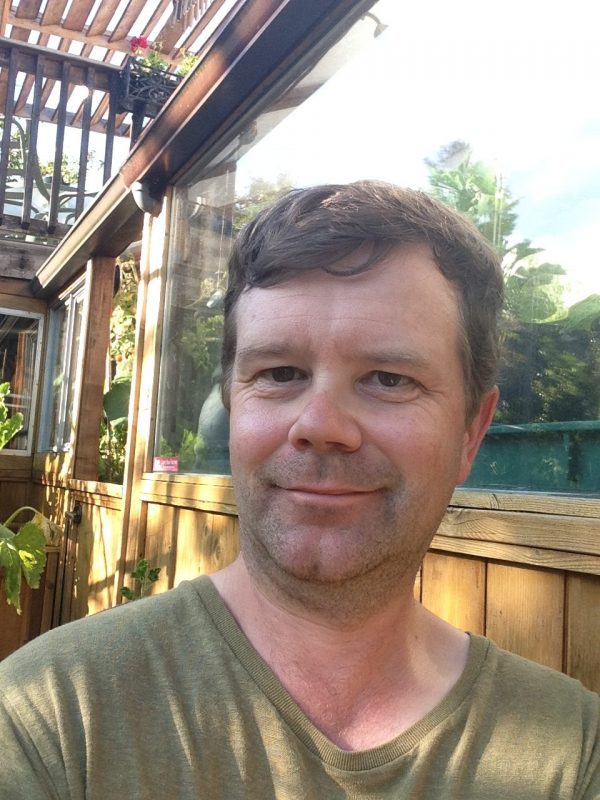 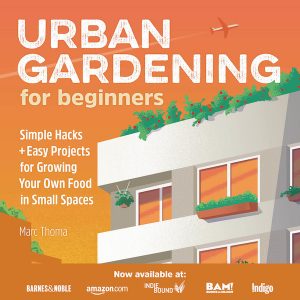 This website uses cookies to improve your experience while you navigate through the website. Out of these cookies, the cookies that are categorized as necessary are stored on your browser as they are essential for the working of basic functionalities of the website. We also use third-party cookies that help us analyze and understand how you use this website. These cookies will be stored in your browser only with your consent. You also have the option to opt-out of these cookies. But opting out of some of these cookies may have an effect on your browsing experience.
Necessary Always Enabled
Necessary cookies are absolutely essential for the website to function properly. This category only includes cookies that ensures basic functionalities and security features of the website. These cookies do not store any personal information.
Non-necessary
Any cookies that may not be particularly necessary for the website to function and is used specifically to collect user personal data via analytics, ads, other embedded contents are termed as non-necessary cookies. It is mandatory to procure user consent prior to running these cookies on your website.
SAVE & ACCEPT
10 shares
×
×